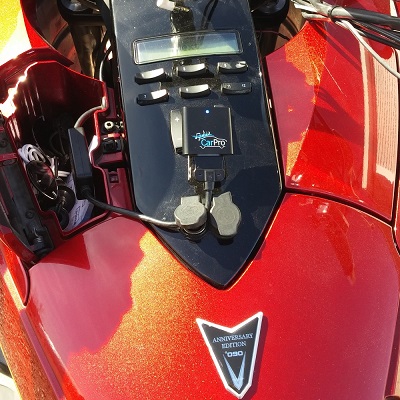 Score another Victory for CoolStream with the new CoolStream CarPro!  This week we can report some really great news for the Victory Motorcycle community.  We recently received the test results of a CoolStream CarPro on a 2009 Victory Vision by Rex, aka Brother Wind.  We are happy to tell you that the CoolStream CarPro was a complete success.  It is easy to pair and delivers wireless music as well as GPS Turn-by-Turn instructions.  The CarPro works with any Victory motorcycle having the Victory iPod connect kit.  All of this worked flawlessly while maintaining the use of volume and song selection buttons on the handlebars.

While we have already had great success with the original CoolStream Duo and Victory, we were curious to see how the brand new CarPro would fair on these iconic bikes.

So what’s the difference between the CarPro and the Duo?

The CarPro is designed to give automobile drivers Bluetooth music streaming.  It also has the ability to control music selection (forward, pause, and back) and volume (up and down) from car steering wheels.  Rex wrote to us and explained, “I use the mp3 on my Android LG G3 and connect the 30-pin adapter to the standard iPod cable supplied on my 2009 10th anniversary Victory vision.”  Rex discovered in using the CarPro that now he can have that same streaming ability of a Bluetooth receiver and volume control and song selection control right from his Victory handlebars. 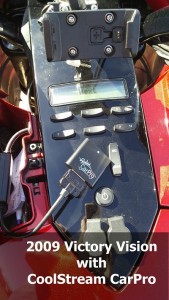 The CoolStream CarPro is small, lightweight, and will auto-connect every time you start your bike.  It couldn’t be easier or cooler to have your music with you on the road.  The CarPro lets you focus on your ride and not changing music on your phone.

While the CoolStream Duo is still a great fit for simple classic streaming, the CarPro provides a really nice upgrade for anyone looking for that added layer of technology to their Bluetooth experience while riding.