Bluetooth music for Harley Davidson is possible when using the CoolStream Duo.  Whether you have an Aux jack as shown here or a 30-pin iPod cable, the Duo can add music streaming in under a minute.

If you are looking to stream music to your Harley, the Duo is what you need.

If your Harley was built between 2008 and 2012, or your bike has the HD Boom iPod connect system, then the Duo is the right choice for you. The cable provided by Harley from 2008 to 2012 is incompatible with the CoolStream CarPro.  In addition, due to the lack of suitable power from the HD Boom, the CoolStream CarPro will not power on and is therefore incompatible with any bike equipped with this cable. 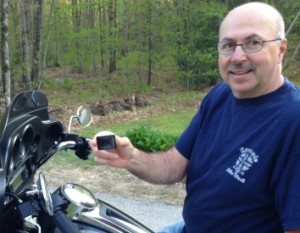 His dad, Walter, was planning a bike trip from New Hampshire to Georgia.  Walter thought it would be cool if he could stream Pandora from his phone to the bike’s stereo.  He was also interested in keeping his phone safely in his pocket. That would be way more convenient than searching for radio stations on his long trip.

Derek plugged the CoolStream Duo into the bike’s 3.5mm auxiliary jack using a dual-tipped 3.5 mm cable.  This cable comes included with every CoolStream Duo.  He then moved the switch on the top of the Duo to the left to turn on the rechargeable battery. Walter’s phone quickly paired to the Duo, and he was ready to stream Pandora. 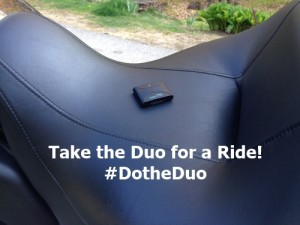 Using the 3.5 mm Aux-In, you will be utilizing the rechargeable battery in the Duo.  Therefore, your Duo will periodically need to be charged.  The battery of the Duo can be charged using an iPod cable. 1-2 hours of charging will provide 4-5 hours of music streaming playback.

Walter was pleased to have a hassle-free solution for his music. He told us, “It was extremely easy to set up and gives me the ability to put my phone away in a safe place while riding.”

Do you have a Harley Davidson with a 30-pin iPod cable?  Then the CoolStream Duo is a great option for you.