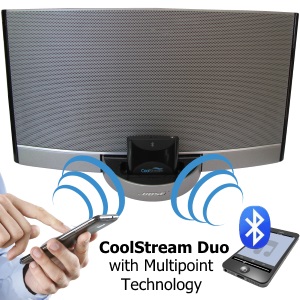 Exeter, NH September 24, 2014 – CoolStream announces that they have upgraded their Bluetooth receiver, the CoolStream Duo, to feature Multipoint Technology. Multipoint allows users to pair two devices (i.e. 2 phones or a phone and a tablet) to one CoolStream Duo at the same time.

Users will now be able to easily switch music between 2 devices. Now you can alternate streaming music from your new iPhone 6 and your iPad. The CoolStream Duo is a Bluetooth adapter that features the original 30 pin connector along with a rechargeable battery and a 3.5 mm auxiliary jack. It plugs into iPhone / iPod docking stations, such as the Bose SoundDock, and gives the dock Bluetooth connectivity allowing you to keep your phone or tablet handy while your music plays. So music lovers that do not have a 30 pin docking station will not feel left out.   Because the CoolStream Duo also includes a built-in 3.5mm auxiliary jack so that it can be connected to stereo receivers or car stereos. There is also a rechargeable battery for music on the go.

Exeter Science & Entertainment (ESE) produces and markets Bluetooth devices under the CoolStream brand. The company is headquartered in Exeter, NH.