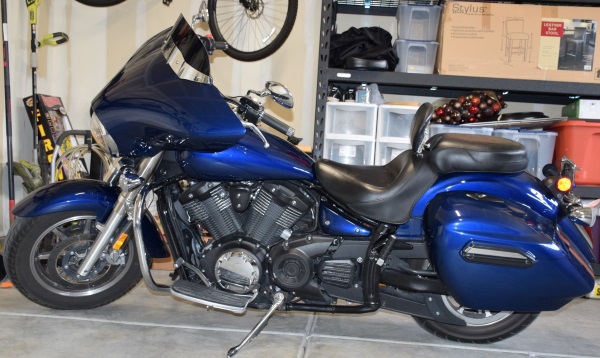 Yes, the CoolStream CarPro for BMW will work with the 2013 Yamaha V-Star 1300 Deluxe with the integrated iPod cable in the saddle bag.  You will be able to connect your iPhone (including iPhone 7) or Android phone to the CarPro through Bluetooth and stream your music to the V-Star’s speakers.  In order for the CarPro to communicate with the Yamaha entertainment system, there must be at least 1 song downloaded and saved to your phone.

The CoolStream CarPro works with the music controls on the handlebars of the Yamaha V-Star 1300.  The Beta Tester does note that it is important to change the mode of the stereo manually.  The audio system essentially has two inputs; one is from the Garmin Zumo GPS in the fairing (which is the default input) and by pressing the “back” button and holding, it changes the mode to the other input which is the iPod.  According to the Beta Tester, the sound quality of the CarPro was very similar to having his old iPod plugged into the cable in the saddle bag.

Here is a video of our Beta Tester using the CarPro on his Yamaha V-Star 1300.