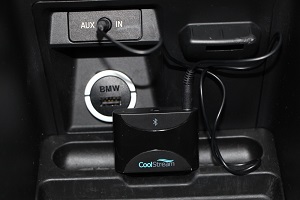 It is long hard process to fall from being all-knowing to possibly being the unthinkable, becoming the unwantable, the thought of which is unfathomable, but the reality is we might be…un-cool.  This is our struggle.  We lay awake at night trying to think of ways to stave off the inevitable.  And when the universe gives you one of those moments, where you can strengthened your grip, reaffirmed your status, you take note.  Bask in it, for tomorrow is a new day where someone else’s parent is infinitely cooler than you.

But for now, the ability to share a new song with the whole car from her phone made my daughter look at me funny.  Not as a peer, eek, but as a little bit of the old mom who knew stuff, lots of stuff and could make magic happen.  She asked if she could pair her phone with the CoolStream.  I almost ran the car off the road.  My heart pounded, beads of sweat appeared on my brow.  Had I obtained a sliver of cool?  Could it be that I could now stream music in my car via bluetooth showing off her musical taste and not mine?

I shook off the nerves, hid my glee, and said as plainly as I could muster, “sure”.  I have no idea what drivel she had us listening to and frankly, who cares?  I was, for a brief moment, cool.